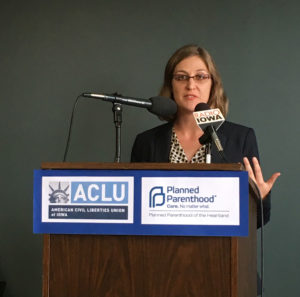 Planned Parenthood and the American Civil Liberties Union of Iowa are going to court, asking a judge to issue an emergency order that blocks implementation of a three-day waiting period for abortions in Iowa.

The bill also says any woman seeking an abortion must be advised of other options like adoption, be given a chance to see an ultrasound and then wait three days before the abortion is performed. Rita Bettis, the legal director for the ACLU of Iowa, said quick legal action’s necessary because the bill was written to take effect immediately.

“That means that the new law will take full effect when pen is taken to paper and it will immediately interrupt the appointments and lives of women already sceduled to have abortion procedures that very day and following days,” Bettis said during a late afternoon news conference. “That was reckless on the part of Iowa legislators and it immediately throws the lives of women and medical services in Iowa into a state of chaos.”

Bettis said the second appointment, 72 hours after the first, is “entirely medically unnecessary.” In addition, some women who had scheduled a medication abortion will have to have a surgical abortion instead because the three-day wait may push them past the 10th week of their pregnancy. And Bettis said in the chaos, other women may be unable to reschedule appointments before they reach the 20th week of their pregnancy.

“Meaning that once the governor signs it, women in Iowa will face immediate harm,” Bettis said. “Some of those have existing medical appointments.”

Planned Parenthood of the Heartland CEO Suzanna de Baca said the “burden” of the three-day waiting period will have a “devastating impact” on women who live in rural Iowa, as well as low-income women.

“We are filing this lawsuit ahead of Governor Branstad signing this bill into law to protect scores of women who would be immediately impacted by this violation of women’s health rights,” de Baca said.

A judge has scheduled a 1:30 hearing Thursday afternoon in Polk County District Court to hear the legal arguments for an emergency court order that would block the three-day waiting period from going into immediate effect. Bettis and De Baca did not rule out other legal action to try to block the 20-week abortion ban as well.

“The governor, lieutenant governor and Iowa legislators have waged an outright war on women’s access to safe and legal abortion,” de Baca said. “Planned Parenthood will continue to fight and we will pursue every possible avenue to continue providing care to our patients, no matter what.”

The governor plans to hold a signing ceremony in his office at 8:30 a.m. Friday for the bill. It means the three-day waiting period requirement — along with the rest of the bill — would legally take effect retroactively to 12:01 a.m. on Friday, unless the judge issues a temporary injunction.

The governor’s office has not yet responded to news of the lawsuit.