You are here: Home / News / Senate panel confirms Branstad’s nomination to be ambassador 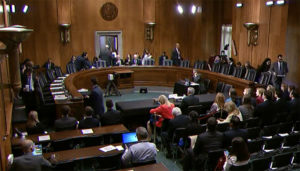 The Senate Foreign Relations Committee has given Governor Terry Branstad their unanimous endorsement to serve as U.S. Ambassador to China today.

The panel convened at about 9 a.m. Iowa time. As senators on the committee trickled into the room, their votes on Branstad’s nomination were tallied. Maryland Senator Ben Cardin, the top Democrat on the committee, made it clear Branstad faced no opposition.

“In regards to Governor Branstad, which is a really critical appointment in China, I thought he conducted the hearings and cooperated with the committee and is fully qualified,” Cardin said shortly after the committee convened this morning, “and I strongly support his nomination.”

Tennessee Senator Bob Corker, the Republican who is chairman of the committee, referred to Branstad’s longevity in office.

“I don’t think anybody misunderstood why he’d been governor for 23 years,” Corker said. “Certainly he was able to answer questions in a way that related to people and we look forward to his service.”

Corker tweeted at about 9:30 this morning: “I look forward to (Branstad’s) confirmation by full Senate.

Reporters asked Branstad yesterday if he was nervous about the committee vote.

“Not really,” Branstad said. “I had a few butterflies going into the hearing before the Senate Foreign Relations Committee.”

Branstad said he got to go into the hearing room the night before and read his prepared remarks aloud while sitting at the hearing table. Branstad’s nomination now is eligible for a vote in the 100-member U.S. Senate and his confirmation to his new post is expected soon.

Branstad has said he plans to resign as soon as he’s confirmed as ambassador. Last week, Branstad told reporters he hopes to complete action by this Friday on the several dozen bills the 2017 legislature passed that he has yet to approve or veto.