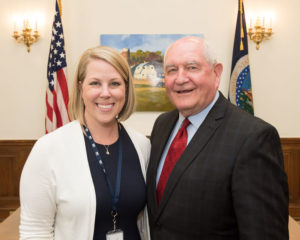 U.S. Agriculture Secretary Sonny Perdue pointed out during his visit to Iowa last week that a Le Mars, Iowa native serves as his executive assistant.

Rachel Pick started working in Washington, D.C. as part of Senator Chuck Grassley’s staff before becoming an employee of the U.S. Senate in the Sergeant-At-Arms office. She says meeting Perdue was happenstance.

She says Perdue needed help getting to the Senate office building for one of the hearings, and Pick says a friend asked her if she would meet Perdue and his family and help them get to the hearing. Pick is a 2003 graduate of Le Mars Gehlen High School and grew up on a farm with her parents Wayne and Kelley Pick. She says her friend told Perdue of her farm background and that led him to ask her about a position in his office.

“Had a phone interview and then a couple of personal interviews over the weekend, and then on Monday they extended an offer to me,” Pick explains. “So, it was a fast and furious interview process to get over here — but I’m glad it happened.” Pick works with Perdue’s scheduler to be sure he gets to meetings and other appointments on time. Former Morningside

“His office is currently just down the hall from me, so they commonly refer to us as the ‘Midwest Maffia,” Pick says. “I think we were both kind of surprised to realize that we grew up just about 25 miles away from each other. So, when we talk about home it brings up lots of good memories, and its nice to have someone in the office that knows almost to the county intersection of where you are talking about.” Pick says Secretary Perdue often talks to her about her opinions on ag issue.

She says she keeps an aerial picture of her family farm on her desk and whenever Perdue meets with cabinet members or others, he points out. “And I think that’s really cool that he does appreciate the fact that I did grow up on farm and that my dad still farms,” Pick says. Pick says she thought she would end up being a teacher in elementary education and special education when she was in high school, and had no idea that she would end up in Washington D.C.