You are here: Home / Crime / Courts / Police use DNA ancestry testing in search of suspect in Cedar Rapids cold case 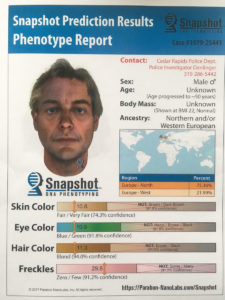 Cedar Rapids police are using a new type of technology to try to solve the 1979 murder of Michelle Martinko, a teenager who was stabbed repeatedly in a mall parking lot.

The police department sent 37-year-old evidence to a company that uses DNA to determine the ancestry and appearance of a potential suspect.

Lead investigator Matt Denlinger says the images they’ve gotten back will help to narrow down the list of suspects. “We don’t eliminate anyone from this necessarily,” Denlinger says. “We eliminate them through DNA. So if these images look similar to a suspect, we will go interview the suspect, talk to them, attempt to collect DNA from them and through that DNA, they’ll be eliminated.”

Long says, “The enhancement of that DNA profile has now given us a different picture of the person that may have committed this crime.” The images show the suspect with different hairstyles both at age 25 and what he may look like now at age 50.

The victim, Martinko, was 18-years-old when she was stabbed to death. Her body was found in her car outside the city’s Westdale Mall. Denlinger says the images have already helped police eliminate some suspects in the case.