You are here: Home / News / Branstad confirmed as ambassador by 82-13 vote in U.S. Senate 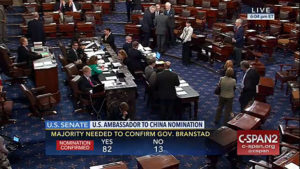 Republican Governor Terry Branstad has been confirmed to be U.S. Ambassador to China.

Eighty-two U.S. Senators voted for Branstad’s nomination and 13 Democrats voted no late this afternoon. Branstad will resign as governor on Wednesday morning and Lieutenant Governor Kim Reynolds will be sworn in as Iowa’s 43rd governor.

Maryland Senator Ben Cardin is the ranking Democrat on the Senate Foreign Relations Committee and he praised Branstad during remarks on the Senate floor before the confirmation vote was taken.

“I had a chance to meet with him in my office and I must tell you I was extremely impressed about how he was prepared to move on to be the ambassador to China and how he spoke in favor of our strong ideals,” Cardin said.

Cardin said Branstad “has a passion about American values.”

“I would say he’s anxious to represent American and global interests for China improving their human rights record, in dealing with the right of religious minorities, in dealing with dissent and the right of a free press,” Cardin said. “He very much spoke about the need for the rule of law.”

Iowa Senator Chuck Grassley picked up on that theme during his brief remarks about Branstad.

“I  have no doubt that he will stand strong for American values such as freedom of the press and religious liberty and work to strengthen peace, stability and prosperity between our two nations,” Grassley said.

“He will bring Midwestern humility and level-headed leadership to the job,” Grassley said. “He is a workhorse who is unafraid to get into the trenches to get the job done.”

Joni Ernst, Iowa’s other U.S. Senator, said Branstad will be an “effective advocate” for U.S. interests in China.

Ernst also mentioned Branstad’s long-standing relationship with the man who is now China’s president after their initial meeting in Iowa back in 1985.

“But he is also prepared to tackle the many other complex, bilateral issues we have with China,” Ernst said, “from North Korea to the South China Sea to human rights.”