You are here: Home / News / Democrats seek to hang Branstad record on Reynolds 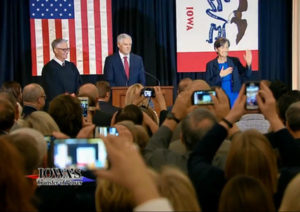 Kim Reynolds waves to the crowd after being sworn in as Governor. Her husband and Chief Justice of the Supreme Court are to her right.

Now that Republican Kim Reynolds is Iowa’s governor, Democrats are hoping to tie her to what they consider former Governor Terry Branstad’s unpopular policies.

“It’s not like she just became governor without being a partner to all of these…She was there for every bit of the agenda that’s held back Iowans,” says State Senator Nate Boulton of Des Moines, one of the Democrats who’s running for governor.

Boulton says after scaling back union bargaining rights and rolling back minimum wage increases in “multiple” counties, the only person who seems to have gotten a “bump in status” from the Branstad years seems to be Kim Reynolds.

“After promising 200,000 new jobs and an increase in household earnings for working Iowans by 25 percent and instead the only thing that happened was one Iowan that can clearly say they benefitted from the Branstad-Reynolds agenda,” Boulton says.

Boulton attended yesterday’s statehouse ceremony, watching as Reynolds took the oath of office and delivered her first major speech. Boulton then drove to Cedar Rapids where he held what was billed as a “Democratic response” to the new Republican governor’s speech.

Democrat Todd Prichard, a state representative from Charles City who’s running for governor, too, issued a written statement. Prichard said the Branstad-Reynolds agenda has had “devastating effects” on what he calls the “forgotten Iowans.”

Reynolds has raised more than a million dollars for her 2018 race for governor. Iowa’s Republican National Committeeman Steve Scheffler says Reynolds appears to be “in good shape” to win a full term as governor.

But Scheffler says neither Reynolds nor the Iowa Republican Party will take 2018 for granted.

“We all remember what happened with Jim Ross Lightfoot and Vilsack that nobody expected,” Scheffler says.

Former Republican Congressman Lightfoot was expected to easily defeat his unknown Democratic challenger, but Tom Vilsack was elected governor in 1998.