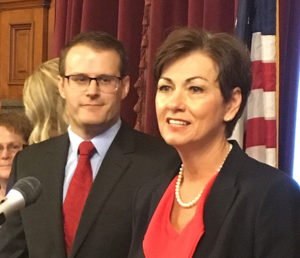 Nearly 24 hours into her tenure as governor, Kim Reynolds has made the executive decision to designate an “acting lieutenant governor.” She’s chosen Adam Gregg, an attorney who worked for Governor Branstad and Lieutenant Governor Reynolds, to be her “governing partner.”

“I value his opinion,” Reynolds said. “I trust his judgment.”

But Gregg he will not be her successor should something happen to Reynolds.

“Battling over who is going to be second in line to succession is a distraction and it’s a waste of taxpayer dollars at this point,” Reynolds said.

Reynolds faced a potential legal battle if she had named her permanent replacement. That’s because Iowa Attorney General Tom Miller said earlier this month that according to his read of the constitution, Reynolds lacked the authority to name a new lieutenant governor. Tim Albrecht, the deputy chief of staff for Reynolds, says the governor decided to name an “acting” lieutenant governor rather than a permanent replacement to avoid a lawsuit.

Albrecht briefed reporters this morning on the governor’s decision.

“Iowans expect a governing duo of governor and lieutenant governor,” Albrecht says, “…so we’re fulfilling what they expect and we’re not going to go small and petty.”

Gregg joined Reynolds in her formal office in the state capitol for a news conference this morning at 10 a.m. Gregg told reporters he’s unconcerned he’s not in the line of succession.

“I am so honored and so excited to have been chosen for this,” Gregg said. “You can call this whatever you want. It’s not going to change the way I serve.”

If something were to happen to Reynolds, Jack Whitver — the president of the Iowa Senate — would become governor. Whitver plans to introduce a constitutional amendment making clear that in future, anyone who is elevated to the role of governor has the authority to name a lieutenant governor replacement.

Reynolds and Gregg will embark on a four-city tour of the state, starting this evening with an event in Osceola. It’s Reynolds’ hometown.