You are here: Home / Fires/Accidents/Disasters / How long will your food last if the power gets knocked out? 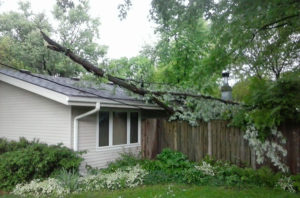 Several storms this year have blown down tree limbs and knocked out power.

Iowa’s seeing more than its share of heavy thunderstorms this spring and the rough weather has brought power outages to thousands of us.

Some Iowans may be wondering how long the food in the fridge will remain good. Brian Hanft, at the Cerro Gordo County Health Department in Mason City, says it depends on the food items and how long the power’s out.

“Anything that is of animal origin, we’re talking about meats, seafood, milk, cheeses, eggs, those sorts of things, beyond two hours, people really should consider pitching a lot of that food,” Hanft says. “It’s unfortunate, but that’s the reality of it.” Hanft says frozen foods will last longer, as long as the freezer door is kept shut.

Frozen goods should be fine for four hours, he says. “If the food product still has crystals on it, and it’s below 40 degrees generally, if the power turns back on, it can refreeze and be just fine.” Hanft says if you do decide to cook the food, make sure you cook it thoroughly.

He says there are a whole range of different safe cooking temperatures, but as a simple rule, cook it to 165 degrees for at least 15 seconds. Hanft says if there’s any doubt about the food, throw it out.

He says if you have refrigerated food and it’s been beyond two hours, it’s always a better option to play it safe than to try to consume the food and end up sick.

“I know it’s a few dollars and money is important, but we’d rather have people throw out food that they otherwise question versus trying to eat it,” Hanft says. “On the frozen food side of things, just use some common sense. If it starts to thaw, and those crystals become really thawed, then again, just pitch that food.”