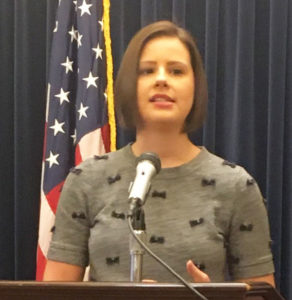 Earlier this week, Governor Branstad’s chief of staff announced his resignation. Michael Bousselot indicated he’ll be taking a job in the private sector. On her first day in office, Reynolds installed Jake Ketzner as her chief of staff. Ketzner ran the Branstad-Reynolds reelection campaign in 2014 as well as Congressman Steve King’s successful reelection campaign in 2012.

Reynolds hired Ryan Koopmans as her new legal counsel for the office as well. Larry Johnson, Jr., had been Governor Branstad’s legal counsel. He now will take over as the state public defender.

The job was open because Adam Gregg had been in charge of the state public defender’s office, but he’s the person Reynolds picked to be her acting lieutenant governor.

Reynolds has made acting Iowa Department of Transportation director Mark Lowe the permanent director of the DOT. The Iowa Division of Credit Unions has a new chief, too. It’s Katie Averill. She’s been a senior VP at Citizens Community Credit Union in Fort Dodge.