You are here: Home / Human Interest / Chinese version of book about former Governor Branstad in the works 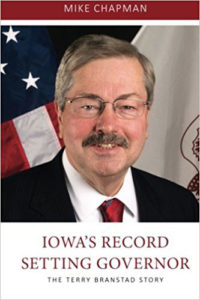 An Iowa author’s book about now-former Governor Terry Branstad’s long tenure in office is being translated into Chinese by a Beijing publisher.

Chapman says, “With all the attention that’s being given to President Trump’s relationship with the president of China and Governor Branstad’s long-standing relationship, I can see why a Chinese readership would be interested in learning more about their new ambassador.” The new edition of the book will more prominently showcase Branstad’s friendship with President Xi Jinping.

“The way I understand it, they will put a picture of the governor shaking hands with the president of China on the cover,” Chapman says. “They’ve asked me to update the introduction just a bit and, of course, I’m glad to do that.” Through a Chinese-American liaison in Des Moines, Chapman signed a contract with China International Press. He expects the translation to come out in the next few months.