You are here: Home / Health / Medicine / Crank up the AC as the next five steamy days may reach near 100 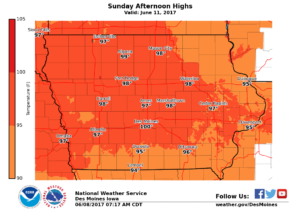 National Weather Service meteorologist Cory Martin says most of Iowa will see highs in the 90s the next five straight days.

“We’re going to see temperatures that are more typical of the latter half of summer,” Martin says. “We’re going to see highs approaching triple-digits in some part so the state and when you combine that with the humidity we’re expecting, we’ll have heat index values probably exceeding 100 across much of the area, especially Saturday and Sunday afternoons.”

So far, no watches, warnings or advisories have been issued in Iowa as part of the steamy forecast.

“For a heat advisory to be issued, we’d be expecting heat indices of 105 degrees or greater and that’s not likely at this point,” Martin says. “However, with the long duration of the heat expected, it still could be dangerous for those that will be exposed to it for prolonged periods of time.”

Reminders are being issued for people with pets or livestock to make sure the animals have plenty of water and shade. These highs, Martin says, are very unseasonable.

Highs in Des Moines the next three days are estimated at 99, 99 and 98 degrees. The Polk County Health Department is warning people to take it easy if they’ll be outside, wear light-colored and light-weight clothing, take frequent breaks and drink plenty of water. According to the calendar, summer doesn’t even officially arrive until June 21st.

“It is early but it’s definitely not unprecedented,” Martin says. “Our record highs are right around 100 degrees for this time of year so we’ve seen it before. Again, it is hot for this time of year. We usually don’t start talking about triple-digit heat for this area until we get into July and August.”

Forecasters say highs aren’t expected to be back around normal again until possibly Wednesday.