You are here: Home / Education / Fire in U-I Science Building put out quickly, but water does lots of damage 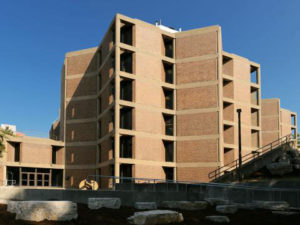 The Iowa City Fire Department is investigating a fire Sunday evening that did an estimated half-million dollars in damage to the University of Iowa’s Bowen Science Building.

Deputy Fire Chief Brian Platz says they were able to put the fire on the second floor of the Bowen Science Building out in 20 minutes.

“We got there and the initial crew not only had a smoke condition inside the building, but also had indication that there was a sprinkler activation water flow alarm — and so they were able to get right to the spot,” Platz says. While the sprinkler system helped contain the fire, the water led to increased damage.

He says with the fire on the second floor, the water from the sprinkler flowed through the rest of the building. “Our estimates are primarily indicating that the building and the contents didn’t suffer sustain a lot in the way of fire damage. But there was some smoke damage, and most of that cost will be related to water damage,” according the Platz.

He says there are fire suppression systems that don’t use water, but he says they are much more expensive, especially in a building this size. Platz says the risk of water damage from sprinklers is outweighed by the protection they provide. “Certainly a lot less expensive than what the fire could have caused should there not be a sprinkler system in place,” Platz says.

Platz says there are a couple of possible causes investigators are looking into, but they haven’t determined an exact cause. The the university’s website says the Science Building “hosts the most concentrated site of research on the campus.” It’s named after Howard Bowen, a former University of Iowa president.

The fire was reported at 5:50 pm. and Platz says there were likely very few people in the building at the time. No one was injured.