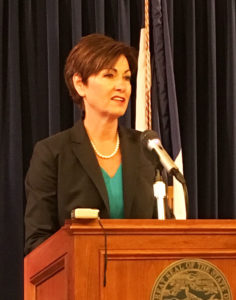 Republican Governor Kim Reynolds today said the state tax code “does not align with today’s economy,” and she’s “open to all aspects” of tax reform in 2018.

“We’re going to put everything on the table and that means we take a look at holistically how we can do comprehensive tax reform,” Reynolds told reporters this morning. “…That is a priority. I believe that’s the next thing we need to do to make sure Iowa is competitive, so that we can encourage business and industry to expand and grow and locate in the state of Iowa.”

But Reynolds said any tax reforms must be “sustainable” and cannot endanger previous state funding promises to schools.

House Democratic Leader Mark Smith issued a written statement, saying the state’s in a financial quandary now because of “corporate tax giveaways” that have “slowed the state’s economy” rather than stimulate it. He said university students are being forced, instead, to pay higher tuition and property owners are paying higher taxes.