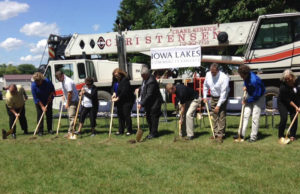 Ground was broken Wednesday on a new Performing Arts Center on the Iowa Lakes Community College campus in Estherville.

“We have planning processes that started about 29 years ago,” Newhouse said. “Through that time, (plans) have changed and been adjusted, we’ve had it larger, we’ve had it smaller.” Leaders of the project finally settled on a 500 seat auditorium.

“This will allow more people access to the great talents that we have, students who come here, as well as community members performing here,” Newhouse said. It’s expected the Performing Arts Center could host its first performances in 2019.

Officials also broke ground Wednesday on a “business programming” addition to the Iowa Lakes Community College Algona campus. Both projects are being paid for through a bond referendum passed by local voters.

(Thanks to Ryan Long, KICD, Spencer)