You are here: Home / News / Book on 1956 Maynard state basketball champions could become a movie 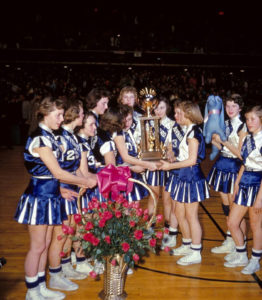 A book that highlights the story of a championship Iowa girls six-on-six high school basketball team could become a Hollywood movie.

Brian Borland self-published the book, “Maynard 8 Miles,” in 2014 — just a few years after learning his mother was the star of Maynard’s 1956 title-winning team.

“I didn’t even find out about this until 2006 when there was the 50th year reunion of the Maynard team,” Borland said. “I overheard my mom and dad talking in the living room about, ‘hey, do you want to go to Des Moines? They’re celebrating the 50 year reunion of Maynard winning the state championship.'”

Borland’s mother, Carolyn Nicholson, scored 25 points as Maynard defeated Garrison 62-51 in the championship game. “I started doing research…and then, the story just got better and better,” Borland said. “This is unbelievable.”

After high school, Nicholson married Glenn Borland – who grew up in Oelwein, 8 miles from Maynard. Glenn turned down a scholarship to play basketball at Iowa and become a star player for the Wisconsin Badgers. The couple raised three kids in Madison, where Glenn had a 30-plus year career as a teacher and coach. 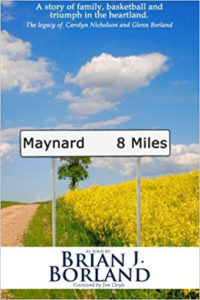 Brian Borland said he wanted to write the book as a tribute to his parents and always felt it would make a good movie. Angelo Pizzo, who wrote the screen plays for “Rudy” and “Hoosiers,” has agreed to write a film based on Borland’s book. “I’ve always had this vision, I just didn’t anticipate I’d be sitting in front of Angelo Pizzo and he’d be interested in doing it,” Borland said. “So, it all kind of came together. It is pretty exciting.”

The 53-year-old Borland still lives in Madison. His father died last year and his mother died in 2009. Borland hopes to both premiere and film the movie in Iowa. “We’re just getting this thing kicked-off and so we’ll have to see how this plays out, but if I had my choice, we would do it in Iowa,” Borland said.

Former University of Wisconsin men’s basketball coach Bo Ryan is joining Borland as a co-producer of the project. Ryan has been a longtime supporter of girls basketball and took special interest in the history of the unique six-on-six game in Iowa. The final six-player championship game in Iowa was played in 1993.

Borland expects the story presented in his book will be “altered” for the movie, but the presentation of the way the game was played in 1956 won’t change. “My focus has always been – lets bring some national attention to this Iowa girls six-on-six game because I think it’s unbelievable. I can’t find any high school girls sporting event, in that time frame, that’s more successful than the Iowa girls state tournament,” Borland said.

Around 15,000 people were in attendance for the 1956 Iowa girls championship game.