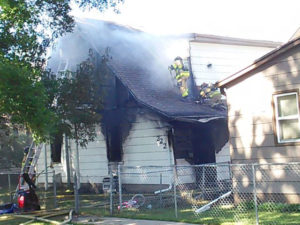 A fire caused heavy damage to a home in Sioux City this morning. Fire Marshal Mark Aesoph says they were called out just before 9 A.M.

“The first unit did go on scene and had heavy fire visible at the front of the structure,” Aesoph says. “There were 10 occupants in the home at the time of the fire, as well as several pets. He says the people in the home included the couple who rented it, some friends and six kids ranging in age from one to 12. All got out without any serious injuries.

“Without that smoke alarm and the early warning to get moving, it could have been a very different situation,” Aesoph says. Investigators are still looking for the cause of the fire.