You are here: Home / News / Hours before Trump arrives in Cedar Rapids, local Democrats gather to discuss state of party 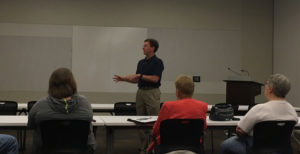 About a dozen local Linn County Democrats gathered in a Cedar Rapids Public Library meeting room this afternoon to air concerns about their party’s message and President Trump, who will arrive in their city early this evening.

“I’m disappointed we still haven’t found a way to work together and we need to do that,” Dahle said.

She wants Democrats to look beyond the “usual allies” and better define priority issues. Dahle, who is 68 years old, is chair of the women’s human rights group of Amnesty International U-S-A and she’s concerned by the Trump Administration’s record thus far on human rights.

“I lived in Brazil and I studied in the Soviet Union, so I have had some experience with repressive governments and I’m quite alarmed with what I’m seeing in my own country right now,” Dahle said. “I don’t want my country to become a police state.”

“It seems like we just can’t get it together to a common goal and get somebody elected,” she just before the meeting started.

But both women have become very active after Trump took office. Dahle is regularly sending email to both of Iowa’s Republican Senators in Washington and Hamlett has the offices of Senators Grassley and Ernst on “speed dial.”

“2018 is coming. Democrats have an opportunity to show up, to vote and at least we can turn around the senate and the congress,” Hamlett said. “At least we could get some things done and get back on the right track.”

Iowa Democratic Party chairman Derek Eadon attended the meeting. From the back of the room, Lindsey Ellickson pressed him for answers.

“It’s great to listen, but what actions right now do you guys see yourself taking to kind of move forward and kind of help build a more cohesive party and kind of make sure our voices are being heard?” Ellickson asked.

Eadon assured the crowd party leaders understand “there’s lots of room for improvement.” Eadon indicated he’s hearing “loud and clear” from Democrats who want their party to have a “more effective message on the economy.” He’s also promising to make public the consultant’s report the party commissioned to dig into why Democrats did so poorly in Iowa in 2016.