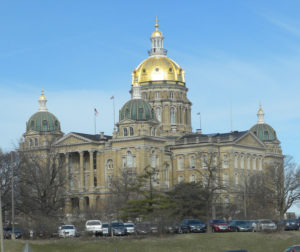 Democrats and Republicans continue to have different opinions on whether the state budget year that ends next week will be balanced without a special legislative session to use more emergency funds.

Governor Kim Reynolds says she is prepared to transfer up to $50 million in emergency funds to address a shortfall between tax receipts and the spending lawmakers approved. That’s the most she can transfer without action by the legislature.

Senate Majority Leader Bill Dix, a Republican from Shell Rock, predicts that won’t be needed. “I’ve had close conversations with the governor regarding meeting our expectations on the budget and at this point I’m going to continue to move forward with the expectation that can be accomplished,” Dix says. “If it becomes evident that it cannot be accomplished, then we’ll take action as it’s needed to be at the time.”

But the top Democrat on the Senate Appropriations Committee, Joe Bolkcom of Iowa City, says recent estimates predict a 100 million dollar shortfall, more than Reynolds could transfer on her own.

“The legislative service agency has said that it looks like we will have a hundred million dollar deficit for fiscal year 17 which would require a special session for the legislature to come in and appropriate more than the 50 million dollars that the governor has the authority to transfer,” Bolkom says.

Bolkcom says a special session should be called in a timely manner so lawmakers can make plans to return to Des Moines.  Both made their comments at a meeting Thursday.