You are here: Home / News / Groundbreaking marks the start of the Interstate 74 bridge project 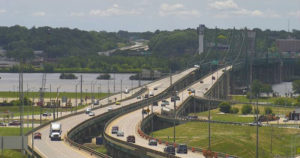 The I-74 Bridge over the Mississippi River.

A long-awaited groundbreaking ceremony is taking place this afternoon in Bettendorf.

The ceremony is jointly organized by the departments of transportation of both Iowa and Illinois. It officially kicks off the reconstruction of the Interstate-74 bridge between Bettendorf and Moline, Illinois. The governors of both states will participate along with local officials.

Last month, the Iowa DOT awarded a $322 million contract – the largest in its history — to a Wisconsin company to build the bridge. It will have two 3,400 feet spans, each with two large arches. Construction is expected to begin next month. The work will take about three years.

(By Phil Roberts, Davenport/photo from the DOT traffic camera)