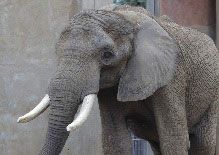 One of the newest and largest residents in the Omaha/Council Bluffs area is getting used to his surroundings after a long road trip from Ohio.

Louie is a 12-year-old African elephant, the latest addition to the Henry Doorly Zoo. Zoo director Dennis Pate says the trip from the Toledo Zoo went smoothly for the 6,000 pound, nine-foot-tall creature.

“The travel part went pretty much as planned,” Pate says. “There were five stops along the way, some of it just to secure the crate to the truck, other times to check on him. He really didn’t drink much water but we had some fruits for him, some watermelon and carrots and apple and melon for him where he got most of his moisture from, but it was almost a model trip.”

There were baby monitors in Louie’s trailer so staff could keep an eye on him while on the road. Pate says the next step is getting Louie adjusted to his new home. “We’re going to get Louie used to the routine of being here in Omaha,” Pate says, “the smells, the sights, the sounds of working in the elephant barn, getting to know the keepers who are going to care for him.”

Louie will soon meet his new barn mates, five female African elephants. Pate says their goal is for Louie to breed with them but when that will happen is up to Mother Nature.

“That’s the $64,000 question,” Pate says. “It really is just whether the girls like him or not. It’s not just male and female there’s a little chemistry there sometimes and we’ll see how that goes.”

A news release from the zoo says Louie was transferred to Omaha based on a recommendation from the African Elephant Species Survival Plan through the Association of Zoos and Aquariums. His potential to breed with the five female elephants would help sustain the genetic diversity of this endangered species’ population in zoos.