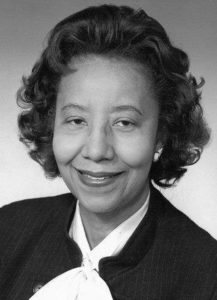 A black woman from Des Moines who was a pioneer in the state’s legal community and state legislature has died at the age of 95.

Willie Stevenson Glanton of Des Moines was the first woman to be an assistant Polk County Attorney and the first woman to serve as president of the state bar association. In 1964, she was also the first black woman to be elected to the legislature. Renee Hardman met Glanton more than 30 years ago, worked with her on a number of projects and recently became her legal guardian.

“She was a true trailblazer,” Hardman told Radio Iowa. “…She overcame so many obstacles.”

Glanton looked out for the “underdogs” in life, according to Hardman.

“She gave a voice to the voiceless. She championed women’s causes in terms of equal rights and equal pay and fairness and she certainly had a passion for issues that really plagued the African American community,” Hardman said. “…No matter your circumstances in life, she didn’t judge you. If she could help you, she would extend a helping hand — a phenomenal woman in every sense of the word.”

Glanton was inducted into the Iowa Women’s Hall of Fame in 1986. Des Moines attorney David L. Brown first met Glanton in the 1970s and was in San Francisco in 2010 when Glanton was honored by the American Bar Association.

“The Glantons, as a team, we’ve never seen anything like them before or since,” Brown said.

Glanton was an active Democrat and she hosted then-candidate Barack Obama in her Des Moines home in 2007, but she had the admiration of Republicans like Senator Chuck Grassley as well. Grassley, who served with Glanton in the Iowa House in the 1960s, used the word “trailblazer” to describe Glanton during an appearance in Ottumwa this morning. Grassley said it “was a real delight” to listen to Glanton speak. Former state Senator Jack Kibbie of Emmetsburg, a Democrat, served in the legislature during the same period. He told Radio Iowa Glanton was a “gracious” person who had a way of ensuring that “even behind the scenes, everyone was treated the same.”