You are here: Home / News / Sporadic rains leave parts of the state in moderate drought 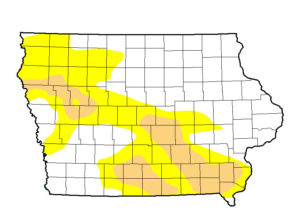 The monthly Water Summary Update from the Iowa Department of Natural Resources shows things have dried out significantly as Iowa entered the second half of the year.

The DNR’s Tim Hall helps compile the summary. “In early June there was just a tad bit of abnormally dry conditions way down in southern Iowa, and over the last five weeks or so, it’s really taken off — kind of in a band running from northwest to southeast Iowa,” according to Hall.

Rains in May and June kept the word drought out of the water report, but it has now returned to the U.S. Drought Monitor report for Iowa.

“We’ve got darned near half the state in some form of dryness or drought — including some of what they call moderate drought — the D-1 moderate drought conditions,” Hall says. “So it is pretty dry in parts of the state.” Part of the problem recently has been the storms that drop the rain are spotty and not widespread.

“We’re even seeing now where we’ve got streams in northeast Iowa that are above normal for flow. And then just to the south and west we’ve got streams that are below normal,” Hall explains. “It’s just a product of the rains this time of year where we tend to get those thunderstorms where one community will get five inches of rain and a few counties away they’ll get zero.”

Hall points out this is the early stage of drought. “It isn’t to the point now where we’re sort of waving the red flag and crying ‘danger.’ There are some areas where the soil is pretty dry. Hopefully the crops are able to tap into some moisture that is a little deeper down,” Hall says. He says Iowa’s situation is better than other nearby states.

“It’s important to note that even the areas that are the worst in Iowa right now are just rated as moderate drought and there are several levels of drought above that where it can get much, much, much worse. If we look to our north and west to the Dakotas and eastern Montana, those folks are in extreme drought conditions,” Hall says. Hall says for now it’s important to keep an eye on the situation and be prepared.

“We’re kind of using this as an opportunity to let people know that it is a little out of the ordinary. That folks should keep an eye on their water conditions. If the water utilities see things get worse, they may ask for voluntary reductions in water usage,” Hall says. “So we’re not at the point where anybody is even close to panicking. But it’s a really good idea to think about it far enough in advance so you don’t get caught by surprise.” Hall says things could turn around as quickly as they dried out with some sustained rainfall.