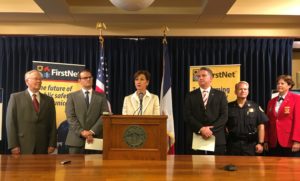 Kim Reynolds is the fifth governor in the country to “opt in” so Iowa agencies may buy AT&T contracts for high-speed cellular service that provides “first responders” with priority access during times of crisis. This morning during her weekly news conference, Reynolds said AT&T’s “FirstNet” service also will help agencies communicate across state lines.

“In the past, this type of communication often has been challenging during emergencies,” Reynolds said. “Now FirstNet can help agencies share better information in real time to respond to situations and save more lives.”

About five years ago, federal officials awarded AT&T $9 billion to start creating a national network that would divert private traffic from mobile networks and give public safety agencies like police and fire departments nearly all the bandwidth in a critical emergency. Governors have until the end of the year to start creating that kind of emergency network on their own — or do as Reynolds has and opt for the one AT&T is developing.

David Ness, a captain in the Des Moines Police Department, said the 9-11 Commission called for first responders to get “first access” to cellular towers and data networks in times of crisis.

“Whether it’s a 9/11 type event or whether it’s a tornado or a flood here in Iowa, our first responders need to be able to communicate to be effective and FirstNet will allow that to happen,” Ness said.

The governor’s “opt in” agreement, however, does not require any Iowa agency to break current contracts and sign up for AT&T cellular and data service. Signing up for AT&T’s “FirstNet” service is voluntary. AT&T officials say their company has spent nearly $150 million over the past three years to increase the speed of its network in Iowa and more money will be invested here in the future.

According to the state government’s “Connect Iowa” program, only a third of the territory in Iowa has access to advanced, high-speed broadband.