You are here: Home / News / Steamy forecast calls for southern Iowa to bake through Saturday 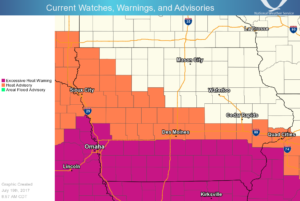 Sizzling summer days are ahead, today and into the weekend. Iowa’s southern three tiers of counties are under an Excessive Heat Warning from noon until 8 PM daily through Saturday.

Meteorologist Mindy Beerends, at the National Weather Service, says today’s highs in that region of the state will reach the mid- to upper-90s, but it’ll get worse.

“Temperatures on Thursday and Friday may be pushing close to 98 to 100 degrees in southwestern portions of Iowa,” Beerends says. “That can mean, combined with the dewpoint, heat index values right around 110 or 111. Definitely that southwest corner, down towards Clarinda, Shenendoah, Red Oak, those areas look like they’ll be the hottest in the state.”

Much of northwest Iowa and parts of central and eastern Iowa are under a Heat Advisory, also through Saturday. Forecasters say we’ll have to endure the steamy weather for at least three days, maybe four.

“We see a little bit of relief into Saturday,” Beerends says. “Temperatures into the mid-90s versus the upper-90s across the southern portion of the state. Heat index values of 100 to 105, that’s still something to watch. We’ll have a cold front move through Saturday night and we’ll see temperatures back into the 80s for Sunday.”

While the heat index doesn’t hit 110 very often in Iowa, Beerends says it’s relatively typical to have a hot spell like this.

“We usually see heat headlines once or a few times per summer, especially here in mid-July, even into early August tends to be the times when we’re most likely to see those heat warnings and heat advisories across the state,” she says.

Iowa’s tall corn may be partly to blame. Beerend says the mature corn plants are starting to pump a lot of moisture into the air and when combined with more moisture streaming up from the Gulf of Mexico, heat indices are climbing into the red zone.