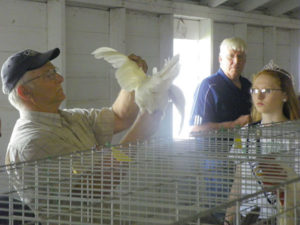 A new state law designed to protect Iowa’s county fairs and the state fair from lawsuits about contagious diseases isn’t just about the animals catching illnesses like the bird flu. In other parts of the country lawsuits have been filed after visitors to animal exhibits contracted e-coli infections.

Tom Barnes, spokesman for the Association of Iowa Fairs, says the law requires signs on the fairgrounds that warn against touching the animals and encourage fair-goers to frequently wash their hands to prevent the spread of disease.

“If the fairs do their due diligence and do everything in their power to prevent such a thing, then this hasn’t been tested in court, of course, it’s brand new, but the onus is not on the county fair if something should happen,” Barnes says.

The signs also must warn against bringing food into livestock areas.

“There has to be a sign posted at the very first point of entry into the livestock area warning fairgoers of the possible pathogenic diseases,” Barnes says.

The law, which took effect July 1, also spells out requirements for properly cleaning livestock areas before and after the fair. Thirty-four county fairs have already been held this month, but today, the gates are open for fairs in 30 other counties.