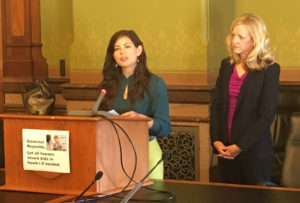 Democrats in the Iowa Senate warn about 11,000 Iowa kids are in danger of being uninsured because their families may be unable to buy individual insurance plans through the Affordable Care Act’s exchange next year.

Senator Janet Petersen, a Democrat from Des Moines, is calling on Republican Governor Kim Reynolds to approve a stop-gap plan for the parents who to get insurance for those children.

“They shouldn’t have to worry about wrapping their kid in a bubble wrap for 2018 because they can’t get health insurance and they can’t afford to have their kid break an arm on the playground,” Petersen said during a news conference at the statehouse. “It’s just simply wrong. We need answers.”

Petersen’s proposal would let those parents buy private insurance through the state-run HAWK-I program. The program currently subsidizes insurance for about 60,000 children who live in a household where the yearly income is at or below 300 percent of the poverty line. Petersen indicated federal bureaucrats would have to grants Iowa a waiver to implement the stop-gap proposal she’s offering for 11,000 more Iowa kids.

“Families’ financial security depends on answers,” Petersen said. “Congress is not coming up with solutions.”

Medica is the only insurance company that plans to offer individual insurance policies on the state’s Affordable Care Act exchange in 2018 and the company has warned premiums will jump 43 percent. Iowa’s insurance commissioner has offered a plan that might lessen the premium hike, but federal officials have to provide a waiver for his proposal, too.

A spokeswoman for Governor Reynolds issued a written statement late this morning, saying “Iowa’s Obamacare marketplace is collapsing” and Reynolds is focused on getting the insurance commissioner’s plan approved “so every one of those 72,000 Iowans—both adults and children—will have a health insurance option next year.”

(This post was updated at 11:35 a.m. with additional information)