You are here: Home / Agriculture / Some crops impacted by lack of water, others are too wet 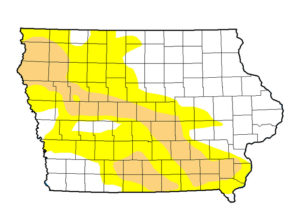 The wide variation in rainfall is an issue in many areas. Iowa State University Extension Agronomist, Virgil Schmidt, monitors the border counties from Muscatine to Fort Madison. He says the northern part of his territory has seen too much rain this summer, while some areas farther south haven’t seen rain in two months.

“The effect is not a good one. We are losing corn yield quite rapidly. From a soybean standpoint, they are a little bit more resilient,” Schmidt says. “A lot of people say soybean yields are made in August. Obviously, there’s a lot more to it than that. But soybeans probably have a probably better potential to recover now than the corn does.” Schmidt says

“In my northern counties people basically have too much rain. And then if you get down toward the Missouri border, there are places where people have not had rain in over two months,” Schmidt says. Another ISU Extension Agronomist Rebecca Vittatoe oversees 10 south-central counties near the Missouri border. She sees the same sporadic rain problem.

“Rain has been pretty spotty. One farm might get some rain, and then sometimes even a quarter mile down the road they get nothing. But, in general we are very dry,” Vittatoe says. The corn plants are starting to show the impact of the dry days.

“Our corn is in that pollination slash grain-fill stage. This is not the time of year when we want to have a lot of stress,” Vittatoe says. “I’m already starting to see those ears take back. So the kernel is pollinated, but now the plant is aborting those kernels on those ears.” Overall corn conditions deteriorated slightly in the latest crop report to two percent very poor, six percent poor and 68 percent in good to excellent condition. Soybean condition also dropped slightly with 62 percent rated good to excellent condition. The corn and soybeans are the only thing that’s hurting from the dry weather.

“It’s also really affecting forages and pastures right now. I know quite a few producers who had to pull their cows off the pasture because it’s just dry and crispy, and there’s just nothing left out there for them to eat. So we’re starting to hear a few people talking about feeding bales already to their livestock,” according to Vittatoe.

Those hay bales are generally reserved for use as winter feed.