You are here: Home / Education / Briar Cliff president resigns after not quite 13 months on job 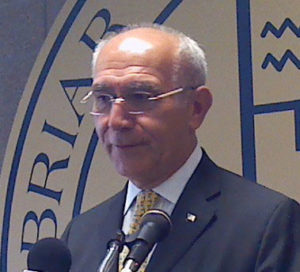 The president of a small Catholic college in northwest Iowa intends to leave his job soon.

The President of Briar Cliff University in Sioux City has resigned after just over one year on the job. Hamid Shirvani sent an e-mail to the Briar Cliff staff and community announcing his resignation. He began his duties as president of the university last July 1.

Shirvani states in his e-mail that he notified the Executive Committee of the Board of Trustees to leave his post as president of Briar Cliff University effective at the end of the fall semester. Shirvani says his resignation was a result of family, personal and professional considerations.

Shirvani will continue to work on special projects under the direction of the Board of Trustees, but Rachelle Karstens, the university’s chief of staff and legal counsel, immediately will begin overseeing all the day-to-day operations.

Shirvani had a short tenure as chancellor of the North Dakota University System. North Dakota’s Board of Higher Education voted to buy out his contract and oust him after just 11 months on the job. He’s previously served as president of California State University, where faculty had taken a vote of “no confidence” in his leadership. Shirvani has said he’s had a positive impact on every institution where he’s been employed.