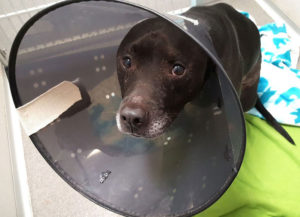 A dog is recovering from stab wounds, while a Des Moines man is facing charges for injuring the animal.

The dog, a pit bull mix named Zeus, was stabbed multiple times to his chest and side, according to officials with the Animal Rescue League of Iowa. It happened Monday on Des Moines’ northeast side. Zeus is now in stable condition after two surgeries, including one to repair a punctured diaphragm.

Police accuse 31-year-old Michael Thomas Mitchell of stabbing the dog with a pocket knife. Mitchell is charged with animal abuse, an aggravated misdemeanor.

ARL of Iowa executive director Tom Colvin notes it’s the second case of dog abuse in Des Moines this week. Another man is accused killing his neighbor’s corgi puppy, by snapping its neck, after an argument with the neighbor about WiFi.

Colvin is calling on lawmakers to increase penalties for animal abusers. ARL staff also noted that Zeus’ medical bills “will be in the thousands” and donations can be made to his care at www.arl-iowa.org/donate.