You are here: Home / Agriculture / Governor and commodity groups discuss several trade issues while in China 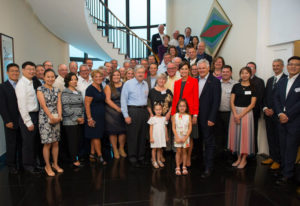 Iowa Governor Kim Reynolds (in red) along with Ambassador Branstad and commodity representatives.

Governor Kim Reynolds spoke with reporters this morning from China where she hosted an Iowa reception along with representatives of most of the state’s commodities groups who are on the trade trip with her.

“We had about 150 people join us. It was a great opportunity for our commodity groups to meet with industry partners. We were blessed to have Ambassador (Terry) Branstad and his family join us for the reception tonight,”Reynolds says. Reynolds says they have also been visiting various agricultural operations in China.

“We had the opportunity to meet with the mayor of Shanghai and to continue to talk about partnerships and visit an aquaculture farm where the Iowa Soybean Association actually invested in technology to help with the production of the aquaculture at decreased cost and increased output,” according to Reynolds.

The governor says they talked about the reopening of the Chinese market to U.S. beef and how they want to continue to expand in that area. She says they also talked about export issues involving soybeans, corn and poultry.

Iowa Agriculture Secretary Bill Northey is also on the trade trip. Northey says having former Governor Terry Branstad take over as Ambassador to China makes a big difference in this trade mission. “And then to be able to see him absolutely totally engaged in his role as ambassador. He looks as natural as can be in that ambassador role. You realize how important it is for him to be in the position of this very important trading relationship and political relationship between the two biggest countries in the world — and then to have this great Iowa connection,” Northey says.

Northey says Branstad’s position and then having all the commodity groups together on the trip along with the governor has been a good thing. He says it has created many opportunities for conversations that they would probably not been able to have if they were traveling alone. Northey characterized the talks as “high level.”

He says the conversations have spanned many agricultural areas and that shows the importance being placed on agricultural trade from the federal level. “I also do believe that some of this that has been happening — whether its the biotech events, the beef trade, the rice opportunities that there are — rice isn’t going to impact a lot of Iowa farmers, but it certainly was movement toward better trade with China. Some of that is because the administration has pushed so hard to move some things that have been stuck for awhile,” Northey explains.

The conference call this morning happened at what was roughly 10 o’clock in the evening in China.