You are here: Home / Fires/Accidents/Disasters / Drought’s grip on Iowa expands 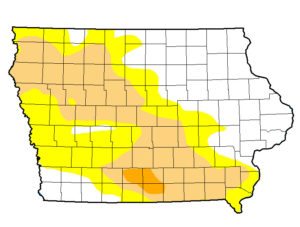 Dry conditions have continued to spread across the state while the northeast corner continues to recover from excessive rainfall. Tim Hall of the Iowa Department of Natural Resources has been watching the situation.

“For the first time in I think three years, we’ve started to see a little bit of what they call D-2 — which is severe drought — creeping into south-central Iowa,” Hall says. Areas that have been missed by recent rains have expanded the colors showing up on the U.S. Drought Monitor map.

“Overall the portion of the state that’s got some sort of classification is almost two thirds of the state. The areas that they rate them as D-0 abnormally dry and D-1 moderate drought — those have also expanded a little bit,” according to Hall. “And it’s really a band if you draw a line from the northwest corner to the southwest corner, it’s a band along that line.”

Hall says the rains have been spotty since we hit July.

“Over the last 30 days, so this would be pretty much the month of July, the southeast corner of the state is between 325 to 50 percent of normal. And there are other areas of the state that are down below half the normal rain,” Hall says. He says it makes more of an impact when the rain don’t come this time of year.

“These are typically the wettest months of the year. Getting a really dry January doesn’t have a lot of impact on hydrologic conditions because we just don’t get that much moisture. Same thing for October and November,” Hall says. “But here in the middle of the summer — May, June, July — when you miss your normal rainfall during a really wet month, it can be a substantial amount of moisture.” He says that lack of moisture starts showing up in lower stream flows and impacts the growth of crops. Hall says it also raises concerns about water supplies in some areas.

“We’re seeing some groundwater levels that are a little troubling,” Hall says, “primarily when we get up into the northwest corner of the state. Those areas have fewer options for where they can get their groundwater, and what they do get tends to be located along streams and rivers.”

Iowa is not alone when it comes to the dry conditions. The U.S. Department of Agriculture says Kansas, Nebraska, Oklahoma and Texas are also seeing stressed crops and farm animals from dry conditions.