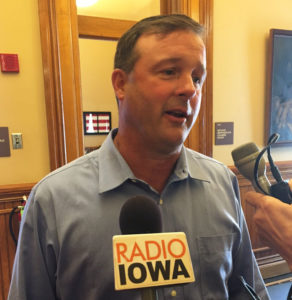 Senate Republicans met privately today to discuss allegations of Senate GOP staff misconduct that were aired during a recent trial.

A jury awarded former Senate Republican Caucus Staff director Kirsten Anderson more than $2 million after hearing testimony about sexual harassment in the workplace. Senate Republican Leader Bill Dix said no one on the staff has been fired or placed on paid leave.

“There were issues learned in tbe trial as the result of testimony that I was not aware of and, as a result, there is an investigation taking place to learn about those allegations,” Dix told reporters after meeting privately with his colleagues. “If we learn that they are truthful, we will move swiftly to address them in the appropriate manner.”

Senator Brad Zaun of Urbandale served on the Republican leadership team in the senate when some of the alleged harassment occurred.

“I think what happened was disgusting,” Zaun told reporters early this afternoon. “I was disappointed in our staff that no one brought any of this type of information to me or we would have done something about it.”

“At the end of the day, I made my peace. I distanced myself from this thing,” Bertrand told reporters after the meeting. “…If this was any other organization in the United States, youwould act quickly and decisively to make changes.”

Dix said Senate Republicans are “very unified” as they work through this and other challenges. Dix said he and the other Republican senators had “candid conversations” in their private meeting that also included the possibility of a special legislative session this fall to address a state budget shortfall.

“I’m going to focus on doing the job that we were sent here to do in the best, effective manner that we can,” Dix said. “And that means working hard, listening to our constituents and continuing to focus on policies that grow our state.”

Dix said the attorney general is still reviewing the jury’s two-point-two-million dollar verdict and hasn’t decided whether there will be an appeal. If the verdict stands, Dix said Republican legislators will opt to have it be paid with taxpayer funds. Dix said that’s standard practice for all trials and verdicts involving state employees and the staffers who work for Senate Republicans are on the state payroll.

Charles Smithson, the secretary of the senate, is now in charge of the investigation of the alleged harassment. Senate President Jack Whitver, a Republican from Ankeny who is an attorney, is overseeing the investigation.