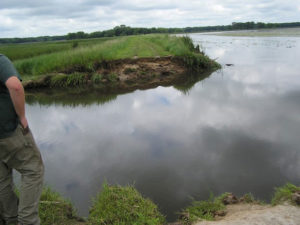 The dike at Sweet Marsh was damaged by flooding.

The Iowa Department of Natural Resources says heavy rainfall Chickasaw and Bremer counties has caused a 60 foot by 40 foot section of the dike on Martens Lake on the Sweet Marsh Wildlife Management Area northeast of Tripoi to fail.

Wildlife biologist, Jason Auel says the watershed for the Wapsipinicon River and Plum Creek got a lot of rain.

“It came in a big flash flood. Upstream of us had 10 to 15, some places had 16 inches of rain in a short amount of time period and it was more water than the marsh could handle coming in that quickly,” Auel says.

A a 60 foot by 40 foot section of the dike washed out on July 23rd and that caused water to be lost from the 255 acre lake. “Typically Martens Lake we hold high because there is a fishery in there,” Auel says, “and we have lost about two foot of water. It is not below anywhere where it has been before when we have done some draw down for vegetation management.”

While it probably won’t have a major impact on wildlife in the lake, he says has impacted boat ramps and access to the popular spot for fishing. “People aren’t going to be able to get out there with their outboard motors and boat like they are typically used to,” Auel says. He says the boating does tend to drop off near the end of July, but they are also getting close to the time when people start scouting out spots for duck season. He is not sure yet if the washout impacted fish.

“We maybe have lost a few fish, but we really aren’t sure…that is part of some of our evaluation we are going to have to do once we get our infrastructure back up and going again,” Auel says. Auel says they are trying to analyze everything to determine how to handle the problem with the dike and other damage.

He says they are working with the engineering staff to try and figure out the best way to get things repaired. Auel says they flooding may also have done some damage to the Aldo Leopold recreation area along the Wapsipinicon River east of Readlyn.

“We expect there to be some damage to some of our infrastructure there, but the river has not gone down low enough to even let us out there to see what kind of damage might be out there,” Auel says. Auel says they will try to assess that damage once they are safely able to do so.