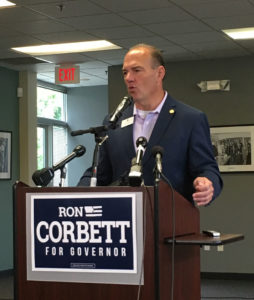 Cedar Rapids Mayor and Republican gubernatorial candidate Ron Corbett says Governor Kim Reynolds is “going in the wrong direction” when it comes to the state’s finances.

Corbett is comparing Reynolds to Democratic Governor Chet Culver. Corbett is reminding Iowans that former Governor Terry Branstad and Reynolds called Culver “big debt Chet” when they ran against him in 2010.

Last month, Corbett accused Reynolds of committing a “mortal sin” in Republican ideology by using money from the state’s cash reserve to cover on-going expenses. The state’s budget situation is a liability to Reynolds in the 2018 election, according to Corbett.

“Is the governor really vulnerable?” Corbett asked. “And the answer to that question is: ‘Yes, she is.””

Yesterday, Corbett spoke to a crowd in Cedar Rapids, emphasizing his plan to dramatically simplify Iowa’s income tax system with a so-called “flat tax” of three percent. Corbett is also calling for increasing the state sales tax by a penny, with three-eights of that increase to be used to address water quality issues. Corbett said there’s a need for “bold action” because Iowa’s economy and population aren’t growing fast enough.

A spokesman for Reynolds said the governor was in Washington, D.C. “fighting for Iowans” at a hearing on the Renewable Fuels Standard while Corbett was “playing political games” in Iowa.