You are here: Home / News / Norwalk church now getting its power from above 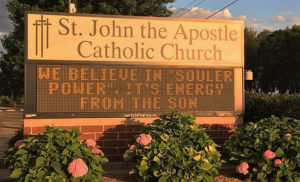 A central Iowa church is switching on its new solar array this week which covers 5,800 square feet of its roof.

The leaders of Saint John the Apostle Catholic Church in Norwalk say having the power generated on-site will offset 40 percent of the congregation’s electricity bill. Terry Dvorak is a member of the church and he’s CEO of Red Lion Renewables which built the array.

“We’re going to save about $2,000 a year,” Dvorak says. “Because we’re doing a power purchase agreement, we’re basically buying the electricity that the solar kicks out at 8 cents a kilowatt hour whereas we’re buy it now from MidAmerican Energy at 11 cents, we have an immediate savings.”

The solar panels are now generating power that’s billed as the equivalent of burning 1,000 tons of coal per year, planting 36,000 trees, or removing 3-million pounds of carbon dioxide emissions from the air. 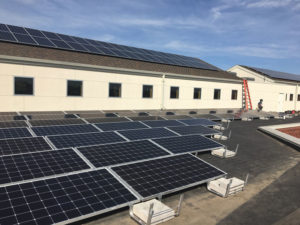 “We’re going green. We’re doing our sustainability efforts,” Dvorak says. “We’re doing our part to curb climate change and be responsible parishioners and citizens for future generations.” While some of us resist change, he says he’s getting nothing but positive feedback on the glistening rooftop panels.

“Everybody, even the skeptics, who said in the beginning, ‘You’re going to put this on our beautiful church?’ Then, ‘Yes, it’ll look fine.’ Now, everybody has come back and said it looks great,” Dvorak says. “It architecturally looks like it was meant to be there originally.”

Under the power purchase agreement, the church paid nothing up-front for the solar array, according to Dvorak. Red Lion Renewables is a solar finance and development company, which he says is “focused on helping schools, churches and cities save money integrating solar while enabling investors to gain a good return and help do our part to combat climate change.”