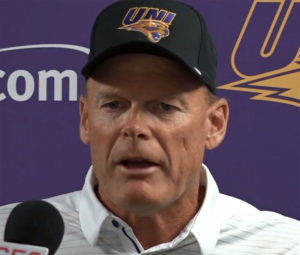 The Northern Iowa football team is looking to turn things around after a 5-6 season last year, and Panther coach Mark Farley says work they’ve already done and the work they are doing prior to the season opener will determine if that happens.

He says they don know yet what this team will be. “Every team takes its own course. This team will find that course when it happens. It’s already been started of course, it started in January. Some things happened this summer, they became stronger in some units. So, it will play out as it plays out,” Farley says.

Farley says they’ve been successful by adapting to the strengths of the players. “We have changed every year, based on the players that we’ve had,” Farley explains. “So, we will go along, we will identify what becomes our strength and that’s what we’ll play to.” The Panthers return a lot of experience on defense. On offense, Farley says the key is building the line.

“Your offensive line is always your culture — it’s not the quarterback — it’s the offensive line. And then if you’ve got two tight ends who are just as tough, then you’ve got a chance,” according to Farley.

He says even if they offensive line becomes a strength, they will have a tough task ahead with the teams they face.”There’s five teams from this league in the top ten — and we ain’t one of them,” Farley says, “so it’s a strong league, strong coaches, strong players, and we go on the road for some difficult games.

The Panthers have six games on the road, including their season opener September 2nd at Iowa State.