You are here: Home / News / Researcher from ISU says don’t let up in effort to help monarch butterflies 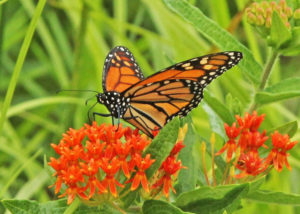 The decline of monarch butterfly populations is getting much attention, but lately, there’s doubt about the severity of the decline and whether it’s caused by the disappearance of milkweed, the only plant on which monarchs lay eggs.

Iowa State University researcher John Pleasants says monarch populations in the Midwest may appear stable because the counts are taken in open areas where the butterflies can find milkweed.

Pleasants says, “The key thing that has happened over the last two decades is monarch activity has shifted out of agricultural fields into these nonagricultural areas where the censuses are made.” Herbicides have killed off many of the milkweed plants and Pleasants concludes monarchs are fewer in number because of it.

“Yes, it’s the loss of milkweed that’s responsible, and yes, all these efforts by many, many people to go out and try to put milkweeds on the landscape, that’s a good thing, it has a sound scientific basis.”

Pleasants estimates at least 1.6 billion new milkweed stems need to be planted in the Midwest to restore the monarch population. He made his comments on the Iowa Public Radio’s program “Talk of Iowa.”