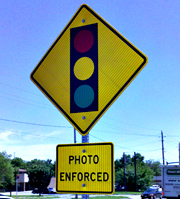 The Waterloo City Council voted 6-1 last night to go ahead with plans to install automated traffic cameras at several intersections within the city.

Councilman Tom Powers says he has some ideas as to what to do with the revenue.

“I look at it as a safety thing and since we’ve thrown out a couple of things on where that money is going to go, I’d like to see it go directly toward high level crime areas. Some of that revenue go toward buying cameras so that we are fully rectifying this area of potential crime and the ability to see people as they travel through our community that committed a crime, mostly importantly to me. Safety is a main concern for me — not revenues,” Powers says.

Councilman Bruce Jacobs was the only vote against the plan. He says the practice is “anti-consumer.” Jacobs says he’s had some calls about the issue.

“One lady caught my attention. She says if you install these cameras, we will not shop in Waterloo going forward,” Jacobs says. “So, it is going to be a little bit anti-consumer. We are going to put cameras up, but we really don’t have a way to enforce the tickets. So we are going to issue a bunch of tickets, we’ll feel good about that. How are we going to enforce it? It doesn’t affect their driving record.”

The council also approved a proposed 3-year agreement with Gatso USA, of Beverly, Massachusetts, to run the automated traffic camera system in the city, similar to a system used in Cedar Rapids.