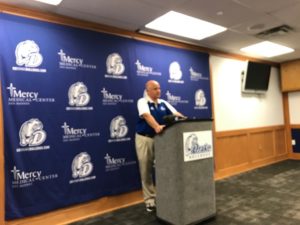 Drake has won six Pioneer Football League championships but none since the league starting getting an automatic bid to the FCS playoffs in 2013. With more than a dozen starters back from last year’s team that finished 7-4 third-year coach Rick Fox says they hope to change that this season.

“Yeah it motivates us”, said Fox. “We’re excited about getting that first playoff berth for Drake University. Not just for Drake and for our team but also for all of the Drake football players who have gone before us.”

Fox has put together a schedule to prepare for an eventual playoff berth. The Bulldogs play South Dakota and South Dakota State out of the Missouri Valley Football Conference.

“That’s why we want to play people like South Dakota and South Dakota State and a few years from now we will be playing North Dakota State”, added Fox. “We need to learn how to play against those people because when we do get that playoff berth we are going there to win. We are not going there just to enjoy the experience.”

Drake opens at home against South Dakota on September 2.