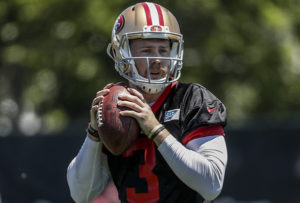 Former Iowa quarterback C.J. Beathard has made a quick transition to the NFL. The third round pick of the San Francisco 49ers is in contention to be the back up to Brian Hoyer and has been impressive in camp.

Beathard says the game is starting to slow down for him after a couple of weeks of camp.

“I think having played in a pro style system helps more than anything by being under center and running the same type of schemes,”, said Beathard “Obviously the terminology is complete different than what I ran at Iowa but playing in a pro system helps.”

Beathard is competing against former USC standout Matt Barkley for the job as back up and is expected to get some action Friday night in the 49ers exhibition opener at Kansas City.

“I am excited to get back out there on the field”, added Beathard. “It feels like forever since the end of last season.”

Former Iowa tight end George Kittle has also played well in camp but is expected to miss Friday’s game with a hamstring injury.