You are here: Home / Health / Medicine / Uncertified eclipse glasses pose a danger to your eyes 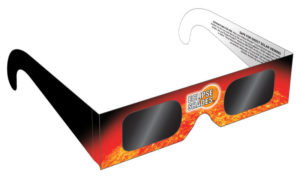 Iowans are being warned to use only certified glasses for watching the solar eclipse later this month.

Experts warn cheap knockoffs may not be safe for your eyes and staring at the sun through them could cause damage you may not realize until later.

Rick Fienberg, of the American Astronomical Society, says many glasses being sold on Amazon are not certified.

“Apparently, the market’s being flooded by counterfeits and fakes,” Fienberg says. “The problem is, we don’t know if they’re safe or not because they haven’t been properly tested. All we know is that because they haven’t been tested, we can’t say for sure that they’re safe.” It can be hard to tell the difference between authentic and counterfeit glasses, so he recommends using NASA’s list of reputable sellers.

“You can’t tell just by looking at them and you can’t even tell just by looking through them, with one exception,” Fienberg says. “If you get a pair of eclipse glasses that are fake and you look through them and the sun is way brighter than what should be comfortable, then you know you’ve got a bad set of glasses. You want to throw them away and replace them with good ones.” Even if you have safe glasses, Fienberg says to make sure you use them correctly.

“So, you look up at the sun, you marvel at the view, then you look down and take the glasses off,” he says. “Then, you look again in a few minutes and you’ll see that the eclipse has progressed a bit.”

The -total- solar eclipse on August 21st will be visible only along a 70-mile wide path that cuts across Nebraska and Missouri — narrowly missing far southwest Iowa. Still, the entire state of Iowa will be darkened about one o’clock that afternoon by a partial eclipse.