You are here: Home / Human Interest / The Iowa History 101 RV is at the Iowa State Fair 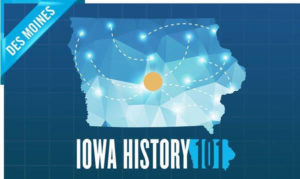 An RV carrying some of the state’s historical artifacts is parked at the Iowa State Fair this week.

Officials call it a “mobile museum” and they’ve assigned the phrase “Iowa History 101” to describe the experience of touring the interior.

“The State Historical Society of Iowa maintains more than 200 million documents and artifacts,” says Iowa Department of Cultural Affairs director Mary Cownie, “but they’re only valuable if people can see them.”

The RV already has traveled to 24 counties, with the goal of making stops in each of Iowa’s 99 counties by the end of 2019. The mobile museum is parked near the livestock pavillion on the state fairgrounds from now through Friday. Governor Kim Reynolds says it’s one way to share Iowa’s legacy with the state’s citizens.

“If you get a chance, be sure to walk through the RV and see some of the highlights,” Reynolds says, “things like a patch from astronaut Peggy Whitson with her spacesuit, a jersey from Lynne Lorenzen’s glory days in six-on-six basketball and, one of my personal favorites, the pen that Governor Harding used to sign the 19th Amendment in 1919 — and this made Iowa the 10th state to ratify the 19th Amendment and give women the right to vote.”

The mobile museum will be parked at the Clay County Fair in Spencer from September 9-17. It’s next stop, though, is this Sunday in northeast Iowa. It will be at the Parkersburg Historical Home on August 20th. The RV’s traveling schedule for the remainder of 2017 is here.