You are here: Home / Human Interest / Iowan heading to Missouri for her fifth total eclipse 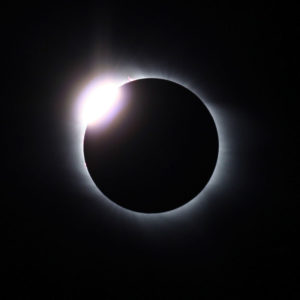 A 90-year-old woman from Hampton, Iowa, will see her fifth solar eclipse Monday. The total eclipse will last just three minutes, but Joyce Blum says it’s well worth flying from Mason City to St. Joseph, Missouri to see it.

“As it goes into the eclipse, it’s very different from one eclipse to another,” Blum says. “And what happens when it’s total, sometimes there’s huge, huge — they call it the diamond ring that goes out and it’s fantastic. That’s when the sun is doing a lot of fire, but it looks like a diamond ring when it’s total.”

Blum was in the Andes Mountains in South America in 1994 to see her first solar eclipse. Blum’s late brother worked for McDonnell Douglas and was a project manager for the moon landing in 1969. He became friends with Neil Armstrong, Michael Collins and Buzz Aldrin.

“The group that planned this trip were the astronauts that made it to the moon and they’re very interesting people,” Blum says. “We got to meet all the astronauts on each of the eclipse trips, but that first one was special because we were in these high, high mountains, we were ready for 20 below.”

Blum flew to the South China Sea in 1995, to the Caribbean in 1998 and to the Black Sea in 1999 to see more eclipses. At least one astronaut was along for each of those trips, too.