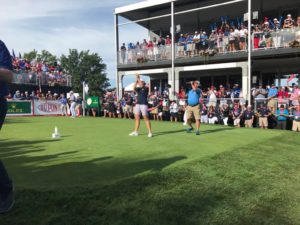 The United States thrilled a large crowd at the Des Moines Golf and Country Club by successfully defending the Solheim Cup. The win was secured when Lizette Salas sank a par put at the 18th to win her match against Europe’s Jodi Ewart Shadoff .

“This is the best golf I have played all year”, said Salas. “I just put in the work and believed in myself andf both my parents are here. I am just so thankful.”

Paula Creamer gave the Americans their first win on Sunday by edging Georgia Hall. The veteran Creamer was placed on the team as an alternate but was one of the keys to the win.

The day started with a huge rally by Lexi Thompson from the United States. Trailing Anna Nordqvist by four at the turn Thompson was eight under par on the first seven holes of the back nine to halve her match.

Thompson says the crowds were a big advantage for the Americans.

“The amount of people out here is truly unbelievable”, said Thompson. “To have them behind me and cheering me on even when I was four down just kept me going.”