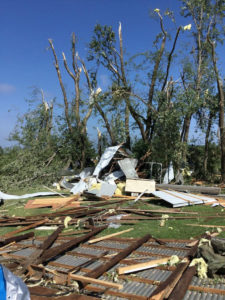 Trees torn up by a tornado near Melvin.

Some farmers in northwest Iowa and southwest Minnesota are tallying their losses after four tornadoes touched down in the region Friday night.

“It actually struck two farmsteads and thankfully no one was home at that point in time,” Heitkamp said. “We rated that tornado officially as an EF2, with wind speeds of about 120 to 125 miles an hour.”

Many buildings on those two Iowa farms were destroyed, but Heitkamp said the homes on the farms were not badly damaged. The tornado had a maximum width of 250 yards and left a path of destruction that covered six miles. 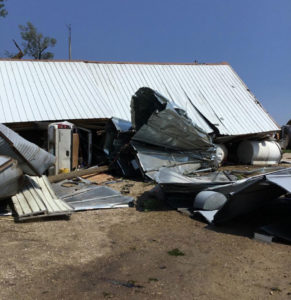 The three other tornadoes, all EF1s, were in Minnesota. In addition to toppling farm buildings, Heitkamp said the four twisters flattened crops and ripped apart trees.

“This is a tornado event that would be very typical in early June, not the middle part of August,” Heitkamp added. “There was a lot of concern on our part – we were actually calling communities ahead of the tornadoes, letting them know, ‘hey, this is real, this is serious, and it could be life-threatening if you don’t take it seriously.'”

One of the tornadoes that passed through Rushmore, Minnesota took down a hog confinement barn, killing dozens of animals.