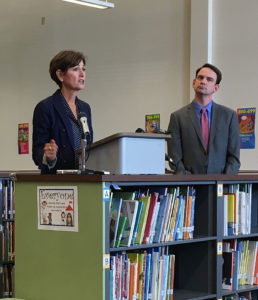 A new report indicates 70 percent of Iowa students in kindergarten through third grade met or surpassed reading goals by the end of last school year.

Iowa Department of Education director Ryan Wise says that’s a four percent improvement in reading proficiency in the early grades compared to the year before.

“Early literacy is critical because success in school starts with the ability to read,” Wise says.

Students are tested three times during the school year to assess their reading skills. The testing began in the fall of 2015 and Wise says it helps quickly identify which kids need more help.

“Students who struggle to read early on are more likely to drop out of school, less likely to pursue post-secondary education and training and less likely to earn a living wage,” Wise says.

Iowa policymakers abandoned a previous plan to force students to repeat third grade if they were not reading at grade level by the end of the year. A pilot program which provided extra money so struggling third graders could attend summer school will not be continued. Governor Kim Reynolds says there may be other ways to accomplish the goal of boosting reading skills among elementary students.

“Bottom line is we want to impact as many students as we can and so we did programming throughout the state with schools that volunteered to participate in the summer reading program,” Reynolds says. “Some of them are still providing that…It’s just not a mandate.”

Reynolds is embarking on a “back to school” tour. Her first stop was at an inner-city Des Moines elementary school this morning where five students read a book aloud to the governor. Reynolds is visiting Emmetsburg schools this afternoon. On Wednesday, she’ll make stops in the Forest City, Central Springs and Garner-Hayfield-Ventura community school districts.