You are here: Home / Fires/Accidents/Disasters / Rains help some with drought conditions 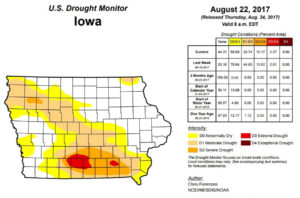 Heavy rains across portions of Iowa in the past week have reduced drought conditions in the state.

The latest U.S. Drought Monitor report released this morning shows nearly 56 percent of Iowa is experiencing some level of abnormal dryness or drought. That’s down from nearly 71 percent one week ago. Much of south-central and southeast Iowa, however, remains in “severe to extreme” drought. Southern Iowa did get some rain in the last week, but it wasn’t near enough to alter the area’s drought conditions.

“They saw, generally, between two and four inches,” Curtis said. “Given the situation of their drought, while (the rain) is very welcome, it’s in many cases a little bit too late and they’re still well behind on their normal precipitation for the year.” More rain is in the forecast through the weekend.

“It does, fortunately, look like we do have some more opportunities to get some more rain across the south. Which, at this point, crops aren’t the concern because a lot of those are lost, but the big key is if we can get some rains down there and replenish that soil moisture, that’s going to mean the world to them come planting season next year,” Curtis said.

In addition to much of southern Iowa, portions of Cherokee and Buena Vista counties in northwest Iowa remain in the “severe drought” category.