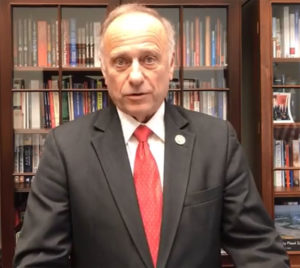 Trump said this past Tuesday that he doubts negotiations with Mexico and Canada will succeed and he will “probably” terminate NAFTA.

“I think the president’s got a negotiating maneuver here when he said he may just cancel it,” King says. “But, in the end, I think that may just be a piece of leverage that gets us a little better deal.”

During the 2016 campaign, Trump routinely called NAFTA the worst trade deal in American history. This past Tuesday, Trump said he didn’t think the U.S. can strike a deal with Canada and Mexico “because we have been so badly taken advantage of.” King says it’s remarkable the two countries agreed to re-negotiate terms of the deal.

“I thought that Mexico and Canada would say: ‘We have a treaty. Let’s keep it. We don’t want to talk,'” King says. “I was surprised they would agree to begin those negotiations, but they did and that tells you something about the power of the United States not only in this continent, but in the hemisphere and in the world.”

Officials from Canada and Mexico met with U.S. officials in Washington, D.C. last week. The next round of negotiations are scheduled to start in September 1st in Mexico City. King says the “door is open” to a “reasonable renegotiation” of NAFTA.

But King says some segments of the economy have been hit by the trade deal, particularly in southern states. NAFTA has been in place since 1994.