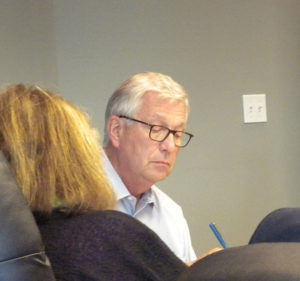 The Board of Regents heard a report Thursday from the Tuition Task Force which summarized the information collected from the public and the presidents of the three state schools.

Board president Michael Richards says he believes there needs to be a proper blend of three resources to achieve the goal of maintaining and improving the quality of the three public universities.

“Documented savings and increases in productivity from the universities. Increased appropriations from the state. Predictable tuition increases for students and their families,” Richards says. “Relying on only one of the three will not allow us to achieve success.” He says the board has to show that it is using the resources in the best way.

“Our approach of this board is to be thoughtful and make longterm changes that continue to generate savings and make our universities more efficient and productive. We need to be diligent in following through on reenergizing our efficiency efforts,” Richards says. He says the board got great input as the task force met to discuss tuition.

“Some 50 emails a day for awhile,” Richards says. “We will consider all points of view as we look at the right mix of savings, state appropriations and tuition,” Richards says. Richards says the Board of Regents has had a long history of cooperation with legislative leaders and he says that will continue. He says they will be asking for more money from the state.

“Together I hope we can work collaboratively to make our public universities the best they can possibly be. The people of Iowa demand nothing less,” according to Richards. Richards says they may have to set next year’s tuition in December before the legislature decides appropriations. But he says they will set the right number.