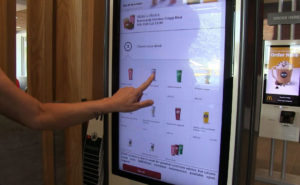 A touchscreen at the Ottumwa McDonald’s.

What’s being billed as “the McDonald’s of the future” is coming to southeast Iowa.

A new restaurant in the global chain will hold its grand opening Friday in Ottumwa featuring several upgrades in technology. Donna Mann, who owns the Ottumwa franchise and seven other locations in Iowa, says the new style of restaurant is just the third to open in the state.

“We were going to be the first and our construction didn’t go as fast as we had hoped so now we’re the third,” Mann says. “Soon, in the Midwest region, which is Minneapolis, Iowa, Wisconsin and some other states, they will soon have 10 or 12 of these. By about 2020, 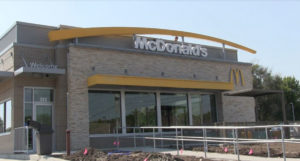 every McDonald’s restaurant will be upgraded in some way.” Mann says the tech upgrades at the restaurant include several large touch-screens that resemble giant smartphones.

“We’ve added kiosks for those who would like to place their own order,” Mann says. “The younger generations especially likes to play with that. We will still have crew at the counter in case people prefer to place an order that way.”

After placing a dine-in order, you’ll get a number on a plastic tent that has blue-tooth technology embedded, so the server will know exactly where you’re seated. A recent survey released by Junior Achievement of Central Iowa found 77 percent of parents surveyed were concerned about their kids being able to find decent jobs due to so much automation.

Mann responded to the survey, saying the new kiosks may actually result in the restaurant needing more employees. “This is a convenience for our customers,” she says. “They don’t have to use that if they don’t like. But, by adding these, we’ve added four new touch-points for people to order, so more people can order at the same time. That creates more pressure in the kitchen area, so we need more people working in the kitchen area. We’re also offering table service where we will deliver your meal to your table. That requires more personnel.”

The new restaurant in Ottumwa replaces a McDonald’s location that was built in the late 1970s. It opens at 5 A.M. Friday with special drawings and other festivities.